I shall undertake a study of the Agatha Christie character Jane Marple and endeavor to recreate such aspects of her life as it can be done within my ways (and means!)

In Miss Marple’s day, the world had passed through numerous tragedies including the outbreak of the Spanish Flu of 1918. There were not so many treatments as we have in our day, and many people relied on home tonics of elderberry to treat their coughs and other flu symptoms.

Elder or elderberry grows wild all over England, and its white blooms herald the summer season as surely as its dark purple sprays of berries announce the end.

Miss Marple remarked in one story that she liked the days when tonics came in big black bottles. If there was elderberry syrup in her bottle, she would have not poured it out!

The outbreak of Covid-19 and the immediate panic when it struck my shores drove me to researching the experiences of the generation who endured the Second World War.

Like now, families in the 1930s and 40s Britain, had to find food. I am sure there were extreme worries about supplies and how to make them last. Rationing helped, but one had to also be creative and frugal.

During the war years in Britain, butter was limited to 2 oz per person per week. For my small family, that would equal 2 pounds per month- and there were not as many butter substitutes available as there are today. 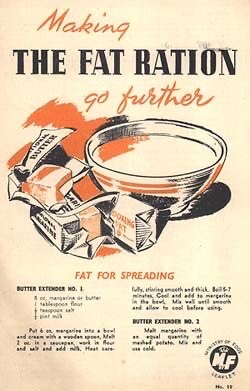 I will try an experiment and discover if I can make 2 pounds of butter last one month(I will not use oils or butter substitutes except drippings).

Update 14 June 2020: I had to barter for butter this week after using up the last of my monthly ration only half way through. I am left with 4 teaspoons to use until next week. I cannot imagine what it was like to have so many other supplies on ration at the same time!

Update 7 June 2020: I have been keeping track of my “butter ration” for the past 2 weeks. I have discovered that my frugality has not been as frugal as I expected- I am down to 2 tablespoons of butter. For the next 2 weeks, we will not be buttering toast or pancakes, and I will be using bacon fat for seasoning vegetables and light frying. I should have hoarded the butter for special occasions such as my son’s upcoming birthday. I totally understand why a frosted cake would have been a rare and wonderful treat.

In the Agatha Christie book Nemesis, Miss Marple is offered a milky drink at bedtime by Clotilde Bradbury-Scott, whilst Miss Marple was staying as a guest in her home. She declined to drink it- and good thing- it was poisoned!

In my own country, a hot drink at bedtime is usually hot chocolate. If Miss Marple had been offered hot chocolate, I believe it would have said so. So I did a little research and found a hot milk-based drink in the UK called Horlick’s. It is similar to Ovaltine in the US, but without chocolate- it is a hot malted milk beverage.

I purchased a tin of Horlick’s and found that I really liked it. I suffer from insomnia if I partake of caffeine late in the day, and I found it to be a nice substitute for cocoa.

There is no doubt that Mary, the cook at the Vicarage, St. Mary Mead can’t cook. On this particular Monday luncheon, she served boiled beef and dumplings, greens, and rice pudding. Actually, she served (or banged on the table) a tough boiled beef, soggy dumplings, and a half cooked rice pudding (nothing was mentioned about the greens other than that they were banged down onto the table in a chipped dish).

Rationing persisted in England after WWII into the 1950s, with meat being one of the last items to be discontinued from rations. Perhaps we are being too tough on Mary- perhaps her beef really was a poor quality (or not beef at all!)

During the second world war, food rationing was implemented and affected everyone in the U.K.- even Queen Mary had a ration book! The ration book was taken to the shop that the resident chose as “their” shop- no shopping around was permitted. The ration book gave you “permission” to buy a certain quantity of rationed items- you still had to pay for it. It was a way to prevent hoarding, black market activity, and shortages.

Special rations were permitted for special needs- growing children, chronically ill or aged people, vegetarians, etc. Ration books were carried with you with your identity papers as it was expensive and difficult to get a replacement if one was lost.

When staying in a hotel, the ration book had to be presented and was stamped as rations were eaten. In one episode of The Body in the Library, the Geraldine McEwen Miss Marple and her friend Dolly Bantry were seen turning in their ration books upon check in.

Whilst reading Miss Marple stories, I have often noted a tea time snack referred to as seed cake- check out Bertram’s Hotel or The Mirror Crack’d to see some of these references.

My investigation into the matter led me to discover that the “seed” in seed cake is caraway seed. In my area of the country, rye bread is frequently flavored with caraway- and I do like rye bread!

I made a recipe of seed cake today to have with my coffee for elevenses, and it was both easy to make and very tasty- not sweet, but flavourful and buttery tasting. The recipe instructed to let cool in pan- I assure you that this did not happen!

When my children were little, I remember them watching a British TV show called William’s Wish Wellingtons. It was very cute and it’s where I learned what wellingtons are!

In America, they are called rain boots. We have had a very wet spring season so far, and if one does not wear rubberized boots, one will get wet feet.

Spring gardening cannot be put off by wet weather- proper gardening gear is required or the lawn and flowers will suffer. So don your wellingtons and set yourself to the tasks that await!

Miss Marple would have approved of these no nonsense wellingtons.

Miss Marple would have enjoyed a little lemon tart for a treat now and then. Lemons were not available during the war years, and it would have been special to have them again for a long time afterwards.

Today I made a lemon meringue pie for my family, but Miss Marple would not have needed a whole pie to herself. I found the perfect recipe for her today from a website TwinklingTinaCooks.com for No Bake Tart with Lemon Curd.

This would be perfect if one was expecting a guest for tea- so quick and easy and the ingredients usually on hand.

My flower gardens are blooming! The first were the purple crocus, then tiny blue forget-me-nots, and now daffodils. The tulips are not quite ready, the rose canes are greening up, and I discovered some peonies peeking through the mulched border.

I have a gardener who has been weeding and dressing the border beds with hardwood chips leaving me (and my poor neck- arthritis) to enjoy the lighter work.

This Sunday morning I made a nice Scottish breakfast- smoked herring, curry scrambled eggs and scones. I love smoked herring, and my local British shop- Wise Choice British Foods, Gifts, and Candies supplies them from Aberdeen, Scotland. I buy them frozen and they are packaged to be cooked in the packet in boiling water (complete with a pat of butter).

The scones were homemade and easy- served with softened butter, or an almond glaze I quickly stirred up, or sifted powdered sugar (or a combination of all three if one is feeling decadent).

Served with a strong cup of Yorkshire Gold tea (sweetened and with milk), I soon felt ready to face this misty rainy day.